It was 24th October 2021, Sunday, when ace photographer Selvaprakash visited my home for a photo shoot set-up by the Outlook business magazine team. This was the first time that I was going to be shot professionally for stills. I was eager, and anxious, about how I would respond to Selva’s camera. 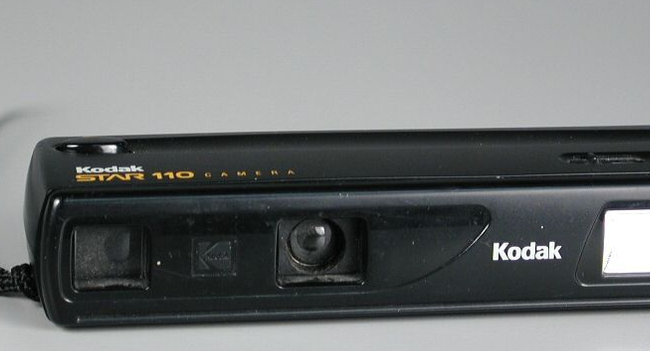 When I was a teenager, I loved the idea of holding a camera and go click… click… click. The ability to capture people and moments forever in frames felt like a dream to be pursued. I aspired to be a photographer or take up a profession that would need me to click. As a 12th Grader, I pestered my dad to buy me a camera. He did, and I was super ecstatic. That was 30 years ago and what he could buy for me was a ‘Kodak Hotshot’ from the Naval Canteen. That was in his reach and budget. The name ‘Kodak Hotshot’ still triggers nostalgia.

Though it clicked awful photos, it was my delightful possession. I carried it with me for a long time until it died of misuse and abuse. Eventually, we moved to other options, but I couldn’t nurture my aspiration to be a photographer. Those weren’t the days when such offbeat career choices were a welcome idea, especially when it came from a young woman. So I slaughtered ‘Photographer Shilpi’. I killed the dream, never to pursue it, ever. The sight of cameras still brings a gleam to my eyes.

It was amusing when Outlook contacted me regarding their work on their recent cover story about talking to professionals who pursued offbeat careers despite being students of management courses. It certainly delighted me to be asked to become a part of their cover story. I was further amused when I was told that their photographer would shoot me over a weekend.

Selva called to ask if I had a mic in my possession. Of course, I have it at my home office, the space I use for my one-on-one voice coaching and sound healing practice. I had no way of knowing what ingenuity his creative mind was going to come up with when he saw me, the space and the mic. I had never known him before, but his voice conveyed warmth and calm. So I knew I was going to be comfortable around him and his equipment. 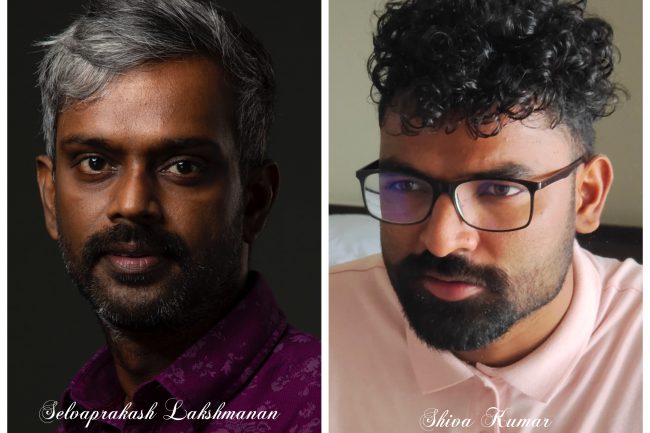 At 4:22PM, he walked in with his colleague Shiva, each one carrying backpacks. I was astounded to see how much stuff their backpacks contained when they unpacked. We exchanged quick hellos, and they took up my home office space rightfully. Purposefully, they moved around and arranged everything meticulously within that space. I was still concerned how it would be when I faced the camera.

Facing the camera wasn’t the actual issue. In fact, my daughter has made me quite comfortable and camera-ready with her penchant for clicking me now and then with a phone camera. She just knows how to click me. The issue was whether I would do justice to Selva’s time and creativity. That thought was eating me up.

I had donned myself in my favorite Jamdani saree, handed down by Ma. I am pretty used to doing this since Grade 7. Saree is my guaranteed comfort zone, an attire that beats anything else in my wardrobe. It’s my permanent solution to, ‘What should I wear?’. So I was feeling comfortable, confident and excited.

The good news was that Selva’s warm voice and Shiva’s cheerful banter had already put me at ease. Reflector, speed, light, camera, Selvaprakash & Shiva were ready and so was I. With bated breath, I sat on the stool as Selva instructed me to. He started looking at me through the camera lens as I kept wondering how I appeared in the frame. Within a few clicks, I started feeling tired, restless and worried to be wasting their time and efforts. I wondered how people possessed enormous patience in this field of work. I have been at other’s shoots earlier, but I haven’t been the subject. The tables had turned this time. I knew I had to be nice and co-operate. 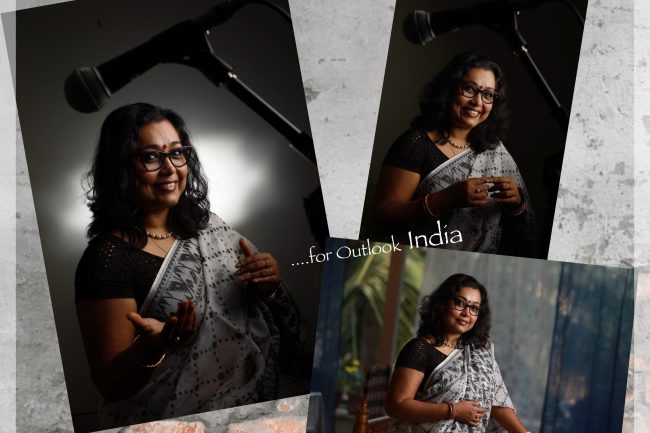 Selva remained unperturbed. His mind was at work. His eyes focused. He kept giving instructions to Shiva simultaneously. I marveled at his calm and controlled voice. Being a voice coach, I cannot help noticing the nuances of voice because of my professional practice. A hazardous habit I have formed because of my kind of work. Selva’s voice conveyed purposefulness. He was thinking of various angles and ways to shoot. His camera seemed an extension of his body as he operated it deftly.

I was admiring the camaraderie between Selva and Shiva. They understood each other in the most comfortable manner. Shiva followed Selva’s instructions to the tee. I loved their coordination and teamwork. That inspired me to forget my tiredness and shift my mind to being playful. I started narrating a story animatedly while Selva kept clicking. He continued to keep coming up with innovative ideas, surprising me, no end. Few times he placed the mic stand in such a way that it looked like a beautiful prop. While at other times he asked Shiva to pluck the mic off its stand and keep it dangling like a pendulum in front of me, just above my forehead. He captured the moving mic at slow speeds, with me in the background. This time, I looked like a prop. 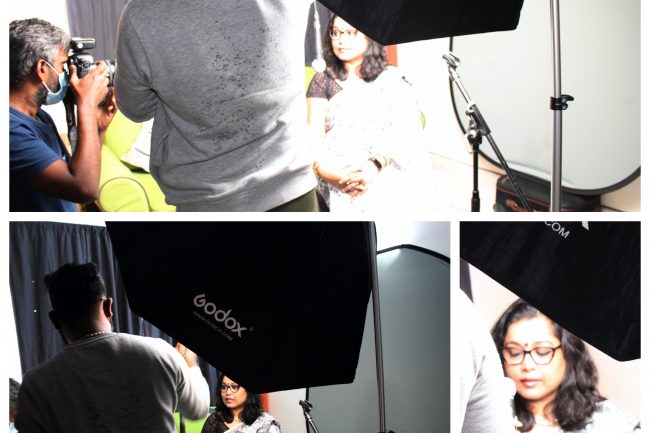 Two hours flew by. There were countless images of me in Selva’s camera now. Both the men were still beaming cheerfully. Selva’s craft and patience filled me with awe. The creativity and precision at clicking so many pictures for a magazine cover story that would probably carry just one or two is a testimony of Selva’s passion. His urge for perfection was clear. His zest for giving beautiful, flawless and variety of options to the editor to choose from spoke volumes about his dedication as a true professional.

I drew parallels with my work, whereas an artist I keep recording countless versions of a practice script unless I am satisfied with my eureka moment. And as a coach, I push my coachee till they scream with pain, firstly because of the push and then after delivering what they expected as a creative delight. A vocal coach or voice artist carries the vocal instrument internally, whereas an ace photographer like Selvaprakash carries his equipment externally, which appears to be a natural extension of their body. 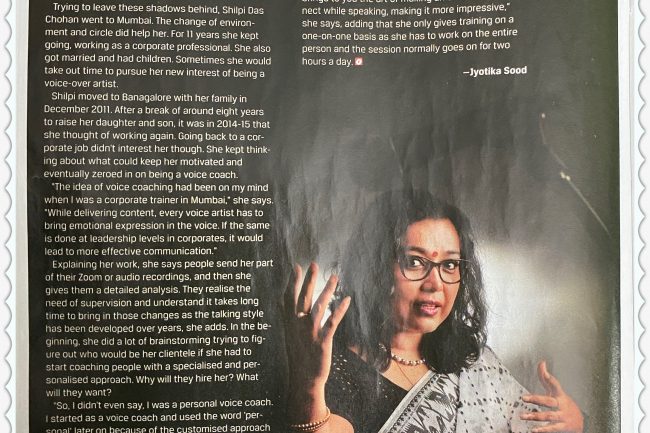 Selva kept directing me as well as instructing Shiva in a calm yet purposeful tone, handling the camera with his expertise. I kept following his direction and continued narrating the story, while Shiva remained in action and followed Selva’s instructions immaculately. We were in great team spirit, and I enjoyed the seamless, no-stress teamwork that resulted in marvelous photographs and an unforgettable memory.

A wise young girl once told me that a camera can never capture what eyes can. That was my daughter when she was barely 12. She uttered this wise thought when we were attending a musical ballet and the audience was going berserk recording on their mobile phones. She pitied them for not letting their eyes do the work and allow themselves to soak in the experience. I innately felt a sense of overpowering pride to be the mother of such a wise girl. But what Selvaprakash captured on his camera was something way beyond my imagination.

It was over two hours before the action came to a close. Every little equipment they had brought out magically disappeared, tucked back into their backpacks. It was time to send them off, but not before some masala chai and vegetable cutlets.