Both the chaos and revelry are over now. Crucial lessons learnt; some relationships ended; new collaborations on the anvil; some flak, some appreciation – I am personally overwhelmed with mixed feelings, a bittersweet and beautiful end to a new beginning, and something that  we nurtured for the last four months.

These two days wouldn’t have been possible without the corporate philanthropists that came forward as sponsors and partners. The venue MLR Convention Centre was sponsored by Celebrations Senior Living, Brigade Hospitality.

Omkar Music Festival in aid of Elderly Care was co-sponsored by YouthPhoriya and Manipal’s American University of Antigua, College of Medicine. Dr. Vani Rao – Co-founder & MD, YouthPhoriya walked an extra mile and sponsored beautiful gift hampers for the guests and artists as well as goodybags as giveaways for the entire audience on both the days.

Marriott International’s commitment to philanthropy brought them onboard as the Hospitality Partner hosting celebrity artists for the event – Amit Kumar as well as Ustad Sabir Khan and his sons. 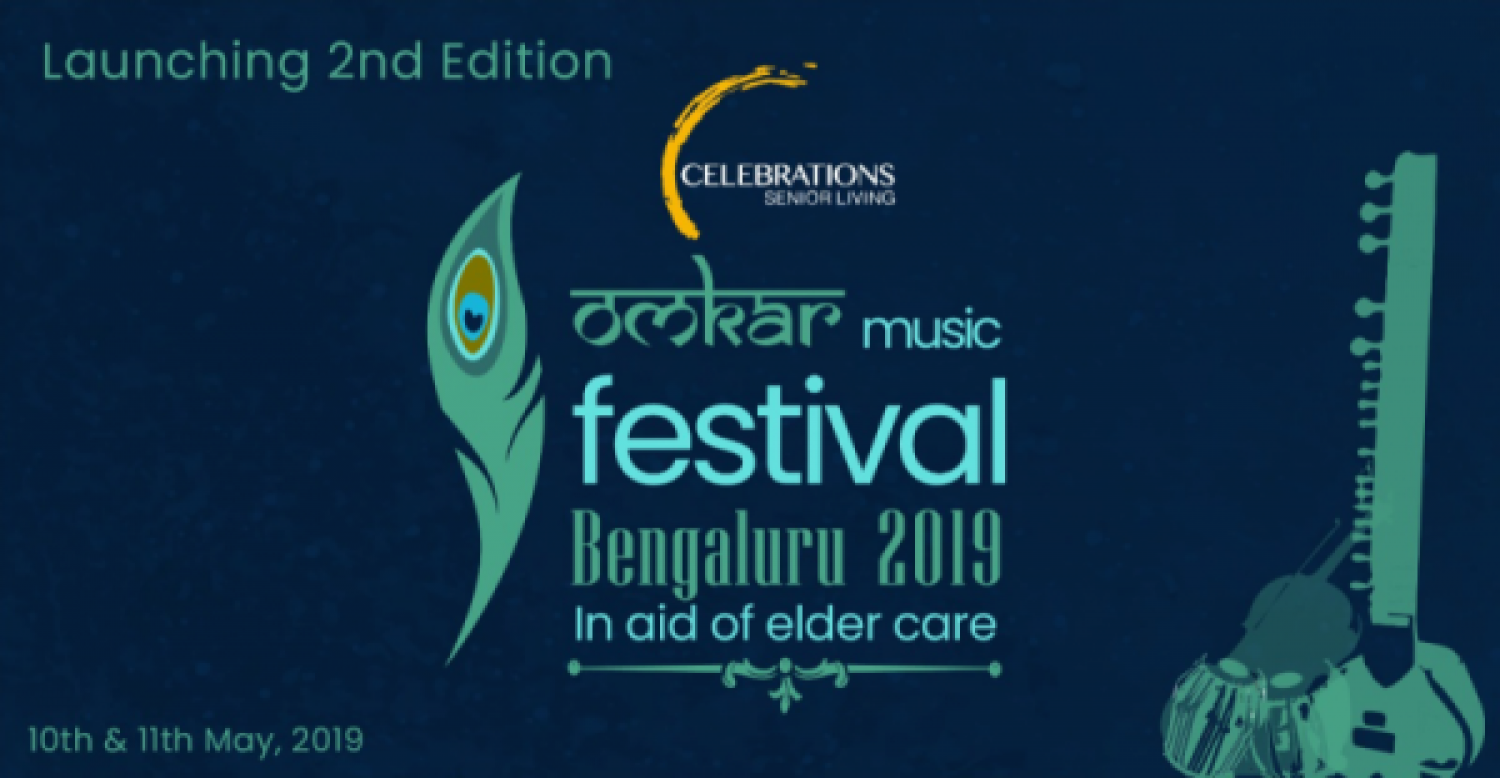 The Hindu – Metroplus, Radio Fever FM and TV5 supported by becoming the media partners in their respective capacities.

Silver Talkies chipped in to be the Elderly Care Partner by deciding to anchor the event and moderate the panel discussions on both days.

The beautiful and festive creatives wouldn’t have been possible without the dedicated efforts of the digital promotion partner BrewMyBrand.

Such support from all directions only speaks volumes about corporate philanthropy that deserves endless gratitude from the organisers and artists. 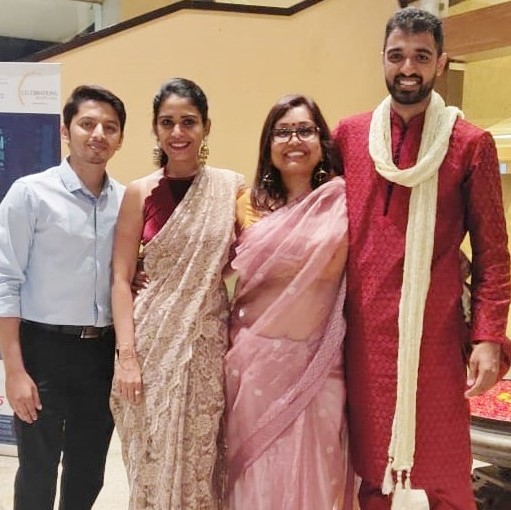 1)     Performances by Pt. Iman Das’s disciples only spoke volumes about his capability as a Guru. It’s a challenge for any Guru to direct and draw stellar performance from young students. The high-point was his composition that was performed by him and his disciples, especially dedicated to the elderly. The members of Omashram Trust present were felicitated on the stage with a shower of flowers along with the song. 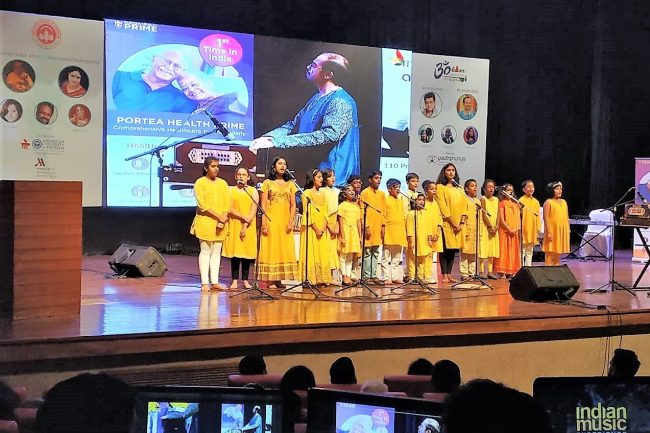 2)     The duet recital by vocalist Monali Dash and flautist Anand Gopinath only further sealed the fact that Pt. Iman Das as a Guru has tremendously contributed to their growth as performers. 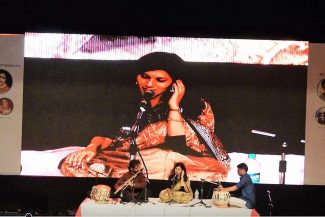 3)     The solo recital by vocalist Ankita Kundu is a testimonial to how the Guru’s guidance has elevated the young artist’s skills to such higher levels. 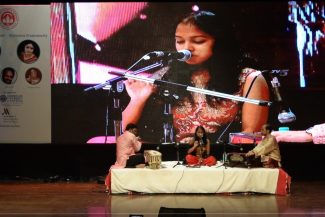 4)     Shankar Sett, the experienced and sought-after cello player could have captivated the audience by a solo recital rather. It was evident that his disciples need more polishing before performing in front of a large audience.

5)     Forty Fingers of Farrukhabad, Ustad Sabir Khan and his three sons kept the audience captive with their tabla feat. Ustad Ji along with his sons Asif, Arif and Ameen were worth the wait. They received the much deserving standing ovation from the audience.People who skipped this percussion performance due to the time delay, certainly missed a spectacular splendour. 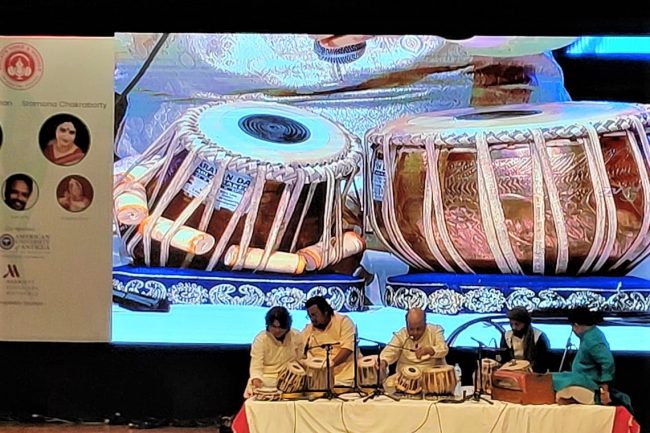 Day 1 was graced by the legendary musician duo Rajan – Nagendra. We were blessed to have three dynamic women as our chief guests.

–         Dr. Parimala Jaggesh, Founder and Director of AlaMirap Nutrition Centre, (Only nutritional company in the world to work with a copyrighted diet process – G.L.A.M. diet) 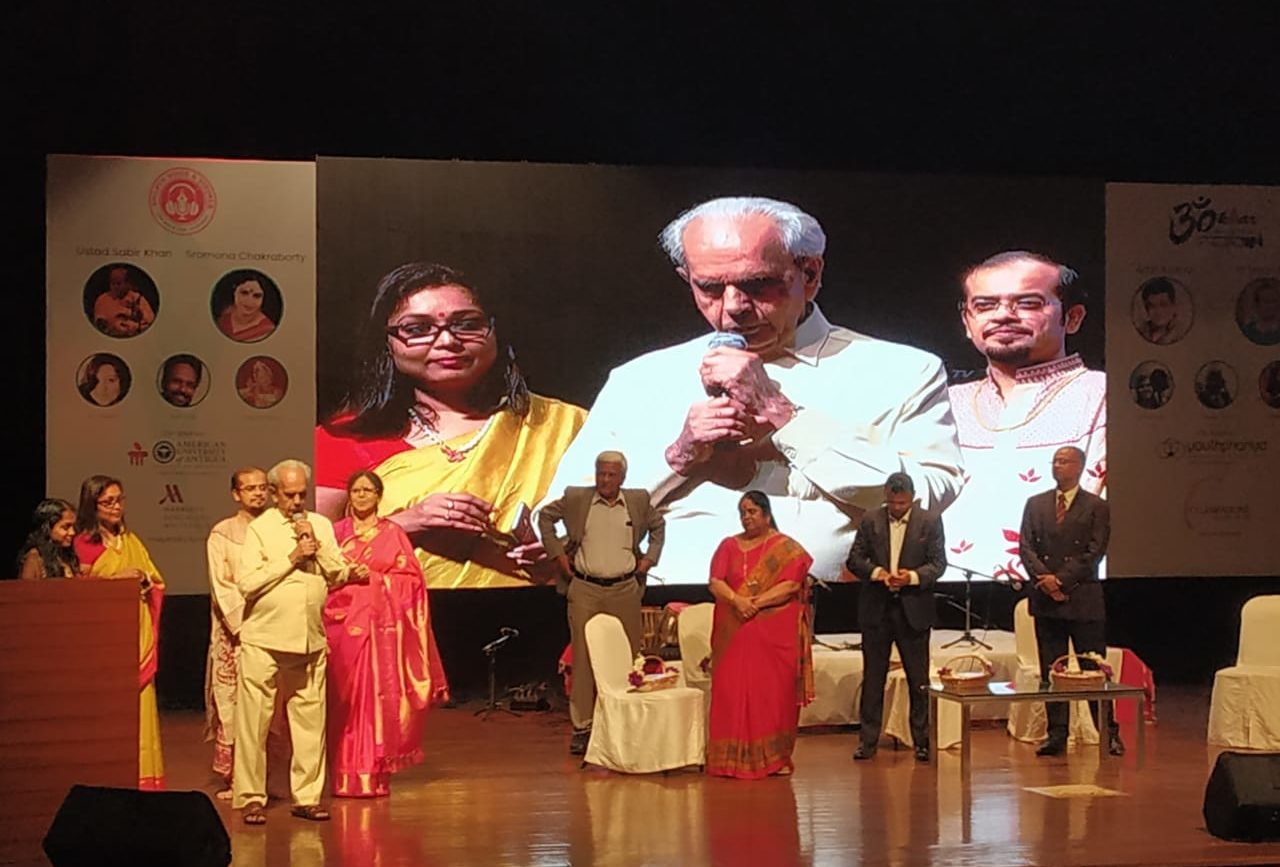 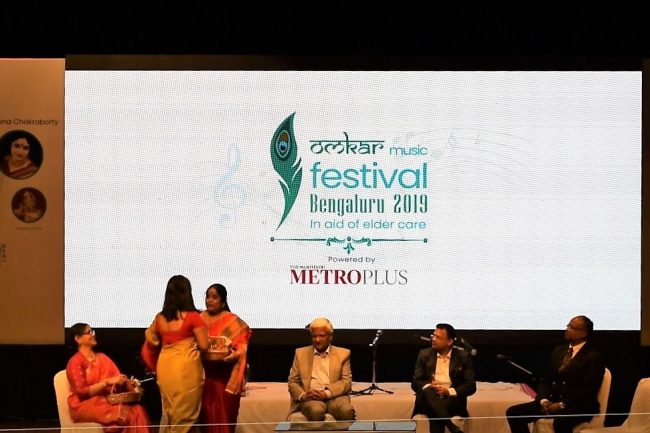 The evening began with an unexpected fiasco. The sound mixer conks off and creates a furore due to the delay. They say a replacement would cost us two hours. Some adults in the audience get up with the mission to gobble up the organisers!

With all due respect to the valid reasons for their state of mind, how does one justify insensitivity? What are we projecting to our younger generation – a problem solving attitude or a mob mentality?

Despite all the preparations with a bird’s eye detail, contingencies are always lurking around, to catch us unaware, unguarded and teach us new lessons!

Also, the turnout on Day 1 was much lower than expected. Probably due to the holiday season and the choice of ticketing platform to make the donor passes available publicly.

SVV strives to promote, market, publicise artistic events in the pursuit of promoting art, artists and fund-raising for social causes by bridging the gap between artists and philanthropists. SVV isn’t an event management firm, but a support system for artistic endeavours. I was clueless getting mobbed by adults full of rage, while I was trying to figure out a solution to ensure the program didn’t get affected further. It was an unfathomable hardwork we had put in after all, for months.

1)     TV5 comes in as a true friend in need. They were prepared for contingency. The spare sound mixer they had carried along, came handy. They offered to help and bail us out of the situation. The capacity of their equipment was low as it could support only eight microphones instead of twenty that was required for the performances. Nevertheless, their help was a divine intervention and left us speechless with their generosity.

2)     Mr. Ranjon Ghoshal – Founder – Mohiner Ghoraguli, first indigenous rock band of the country and CEO – Forum Three, one of the oldest drama companies of Bangalore stepped us as our next saviour. An elderly gentleman and one of our guests of honour for that evening, who was already there witnessing the outrage and helplessness decided to not be a silent spectator. He left his seat, walked up to the stage and addressed the audience. His soothing voice and words of wisdom worked wonders to calm down the bunch of outraged adults who have had obvious reasons to get impatient due to the delay caused.

3)     Gratitude: A simple ‘Thank you’ seems so insufficient to express SVV’s heartfelt gratitude to these saviours!

1)     The musical presentation by Pt. Iman Das this evening too again ascertained his mettle as a Guru honing the skills of this disciples with utmost precision.

2)     The dance presentation by acclaimed Bharatnatyam dancer Smt. Snigdha Sinha and her troupe was an innovative one as they performed the classical dance of the south on Hindustani song composed by Pt. Iman Das. This song Ma Meera was selected among the top 100 compositions by World New York Radio recognising Pt. Iman Das as one of the top emerging artists of the world.

3)     Aati Rahengey Baharein – An Unparalleled Jugalbandi was the much-awaited presentation. Not only were the artists eager to perform but the audience too has been waiting impatiently. 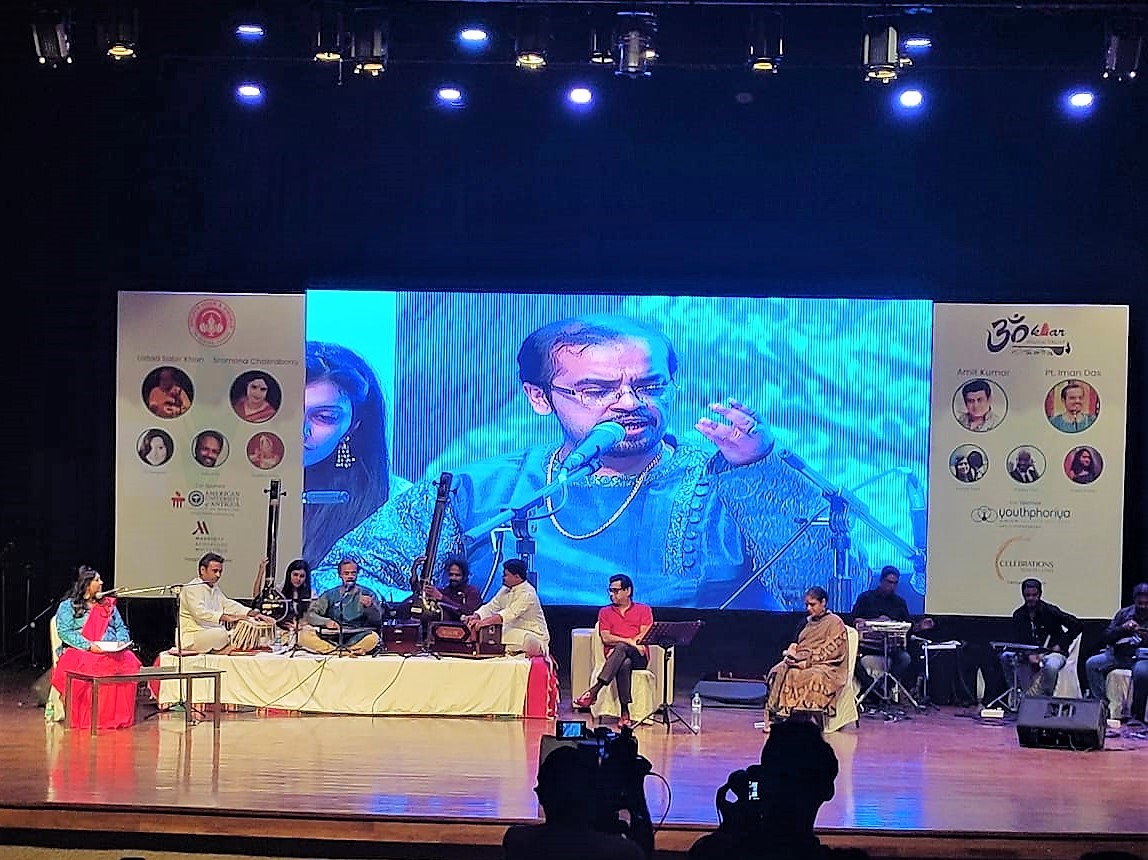 Sromona Chakraborty added the required feminine charm to the whole do with her melodius voice by being the female vocalist, while RJ Swagata added sheer nostalgia with her story telling, narrating anecdotes about each song celebrity singer Amit Kumar Ji performed. On one hand the legendary singer Kishore Kumar’s son Amit Ji held the audience captive with his glossy entertainment. And on the other hand, Pt. Iman Das cast a spell with his brilliant transcription of each song sung by Amit Ji into the corresponding ragas. He proved how commercial songs are essentially based upon the very seven notes forming the various ragas. Once again, a genius of a concept conceived and conceptualised by none other than this brilliant explorative artist that Pt. Iman Das is. 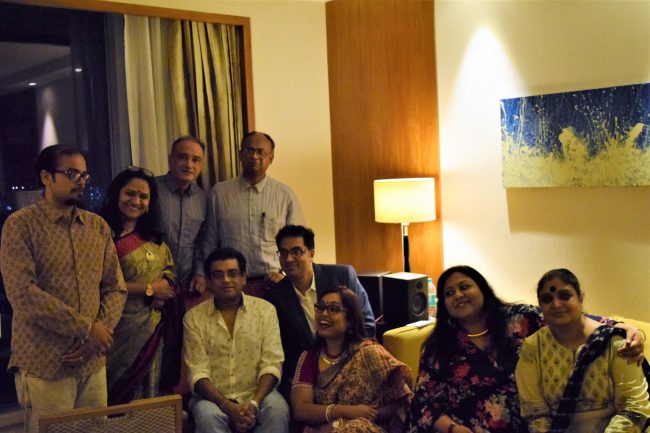 Day 2 was graced by the benign presence of Satyarup Siddhanta, ace mountaineer holding an esteemed place in Guinness Book of World Records and the following chief guests:

The panel discussion on both the days brought out myriads of perspectives from the speakers regarding the social cause of Elderly Care and about Music for Health and Wellness. 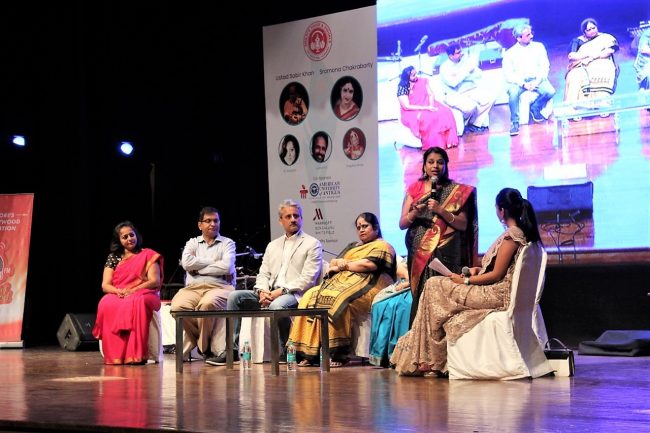 Omkar Music Festival 2019 concluded with much Gusto and Grandeur!

Originally published on LinkedIn on 13th May 2019.